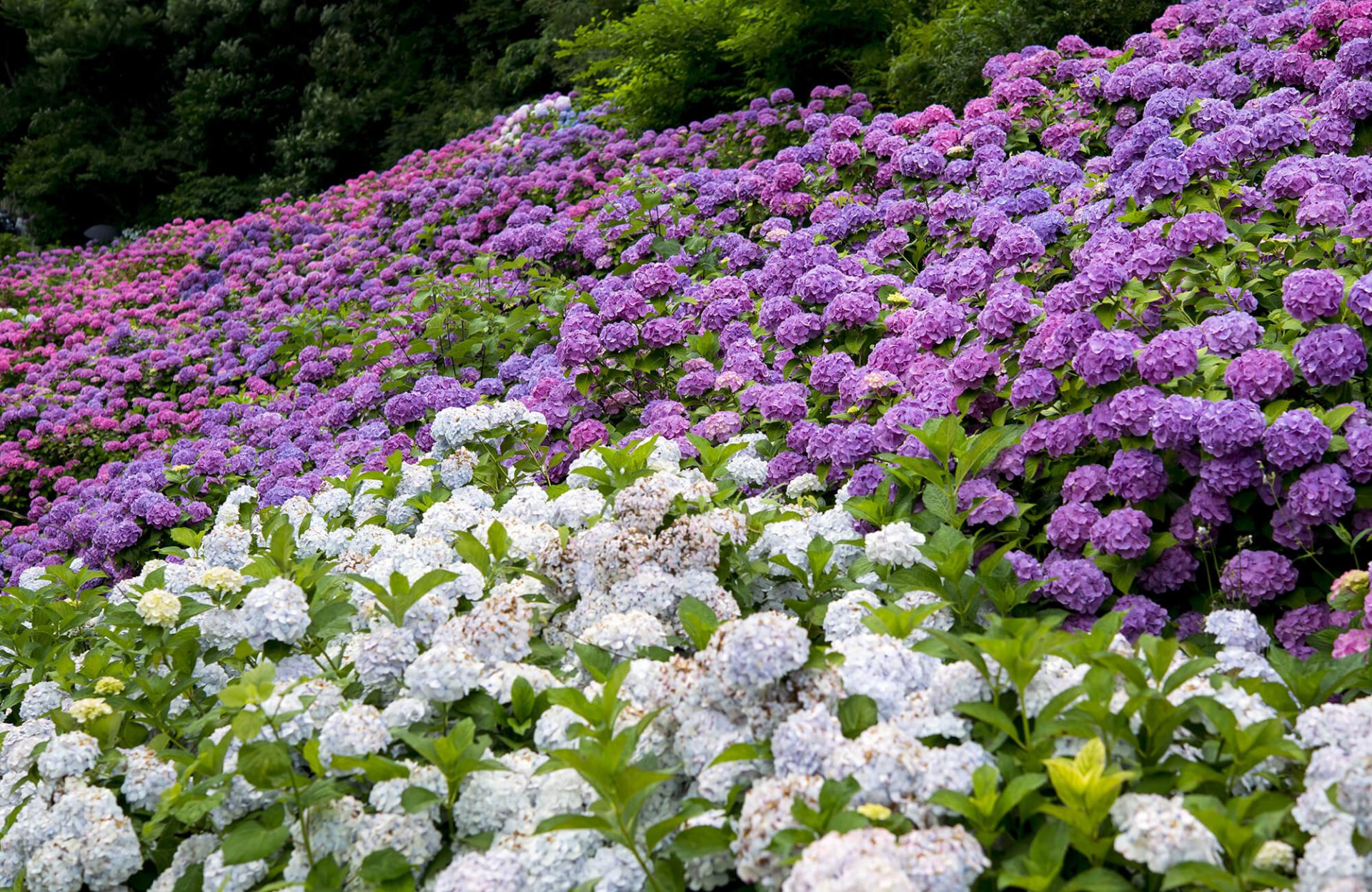 Hydrangea is a flower with a long history and tradition in Japan. Because of their beauty and special significance, hydrangea flowers are adored by the Japanese people in the same way they do for the Sakura flowers during spring. If the plum blossom (Ume, 梅) is the sign of early spring, hydrangea (Ajisai in Japanese, 紫陽花) is a sign that summer is approaching. The hydrangeas blooming season starts from the beginning of June until the middle of July, coinciding with the rainy season (Tsuyu 梅雨). Hydrangea blooms in a wide range of colors ranging from white, blue, turquoise, pale red to dark purple.

It is said that the history of the hydrangeas dates from the Nara period (710-794) where they appear in different poems of the period. Later, during the Edo period (1618-1868), the flower was honored by the samurai due to its ability to change colors.

The hydrangea is a flowering shrub originally from Japan that grows in two principal varieties: the “Hortensia Nacrophylla (額紫陽花 / Gaku Ajisai)”, that grows on the wild all around Japan, and the “Western Hydrangea (紫陽花 / Seiyo Ajisai)”.

The hydrangea is also called “Nanahenge” (七変化), which literally means that it changes seven times. The reason for why this flower receives this name is because the color of it’s petals changes depending on the pH of the soil during its growth. Based on the pH of the soil, the color of the petals varies from dark blue, light blue, light purple, purple to white. That is why the flower looks different every moment. The delicate and subtle combination of colors makes the hydrangea a very popular flower. And this distinctive characteristic has given this flower a symbolic meaning in the japanese literature.
In Japanese poems, as well as in other art works, the flower is often used to represent a changing and fickle heart.
Because the flower can change the color of the petals according to the environment, the meaning of hydrangea is often associated with what is imperishable and immortality.

Generally, hydrangeas grow on the grounds of temples and shrines, gardens, parks and riverbanks. Hydrangeas in full bloom are an unforgettable display that you should not miss if you are in Japan during this season. Rainy days are the best time to enjoy the ajisai. It’s petals look especially beautiful when they shine under the raindrops and morning dew.

In this article I introduce you some of the best places where you can enjoy the hydrangea flowers in Aichi.

Located in the Mikawa Bay, Katahara Onsen is an area of hot springs well known for its large hydrangea garden called “Ajisai no Sato” (あじさいの里) or Hydrangea Village. 50,000 of these magnificent flower shrubs embellish the shore of the lake. And at nightfall, the garden lights up giving a magical air to the already beautiful lake.
Best time: Beginning to end of June
Light up: 17:00 – 21:30
Address: 28-1, Ichinosawa, Kanehiracho, Gamagoori, Aichi
Google Maps
Access: From Nagoya station, pick the JR Tokaido line to Gamagori station. During the Ajisai festival you will find direct buses from the Gamagori station to Mikawa Bay at from the bus terminal.
Hours: 8:00 – 21:30
Prices: 300 yens (free for children under 15 years)
Visit the website

This small sanctuary is very popular for its annual festival called “Bisai Ajisai Festival” (尾西あじさいまつり). During this festival more than 8,000 hydrangea shrubs from 70 different varieties bloom around the sanctuary.
And In addition to the flowering hydrangea bushes, every year the fountain of purification water found at the entrance of the sanctuary and called Chozuya (手 水 舎) is decorated with colored hydrangea flowers. And surely you will have seen photos of this fountain on Instagram, since every year thousands of people approach this sanctuary to take only photos of this fountain.

Best time: Beginning to middle of June
Light up: 19:00 – 21:00
Address: 1145 Miyanishi, Sanjo, Ichinomiya City, Aichi
Google Maps
Access: Pick the Meitetsu train to Ichinomiya or, pick the JR train to the Owari Ichinomi station. From there change to the Metitestu “Q” bus and get off at the “Bisai Chōsha Zen” (尾西庁舎前) stop. From there it’s 15 minutes walking to the south.
Hours: 10:00 – 16:00

The Honkoji Temple is the family sanctuary-temple of the Fukozu-Matsudaira clan. It is also known as the “Temple of Hydrangeas in Mikawa” (三河のあじさい寺). Here about, 10,000 hydrangea shrubs bloom around the temple decorating it with different shades of pastel colors. During the festival of hydrangeas (紫陽花まつり) the place has small stalls where they sell local products.

Best time: Beginning to end of June
Address: 17 Uchiyama, Fukozu, Kota-cho, Aichi
Google Maps
Access: Pick the JR Tokaido line and get off in Sangane Station (三ヶ根駅). It’s a 5 minutes walk from the station.
Hours: Open 24 hours
Prices: Access to the temple and the treasure room is free. Sanganesan Skyline is a road about 5 kilometers long that runs through Mount Sangane and runs from Nishio to Katahara Onsen in Gamagori. Driving on this road allows you to experience the beautiful panoramic views of the area of the city of Gamagori and the sea.
Here, 70,000 hydrangeas bloom along the road all the way from Katahara Onsen (Gamagori) to Higashihazu-cho in Nishio. From the road you can see in the horizon Mount Sangane, also known by the name of “The hydrangea line”.

Lagunasia Flower Lagoon is one of the areas of the Laguna Ten Bosch amusement park in Gamagori. This area is a flower garden where you can enjoy the hydrangea flowers with three zones: the Flower Fall or waterfall of hydrangeas, the Ajisai Virgin Road or the way of hydrangeas and the Flower Sky, also known as the bridal flowers bouquet.

Best time: Beginning to end of June
Light up: 17:00 – 21:30
Address: 2-3 Kaiyo-cho, Gamagori City, Aichi
Google Maps
Access: From Nagoya station pick the JR train to Gamagori station. There you can pick a free train that will take you in 15 minutes to the theme park.
Hours: 10:00 – 21:00 （Varies depending on area, season and day of the week）
Prices: Lagunasia: adults 2,150 yens, elementary school students 1,200 yens, children from 3 years 700 yens
Visit the website (Japanese)

Kokayama Kotokuin temple was moved from Koyasan (Wakayama Prefecture) to Aichi Prefecture in 1869. This temple is located in one of the areas of the famous Battle of Okehazama. The Battle of Okehazama took place on June 12, 1560 when 25,000 invading troops of Imagawa Yoshimoto were attacked and defeated by 2,500 soldiers under the command of Oda Nobunaga.
The gardens around the temple are surrounded by large bamboo trees that together with the hydrangea flowers make a mystical and spectacular landscape.

Tsuruma Park is considered one of the 100 best places in Japan to see the cherry trees (sakura) in bloom. In addition to cherry blossoms, Tsuruma Park is also a great place to enjoy the hydrangea and Japanese iris flowers, which also bloom during this season. In the southern area of Tsuruma Park, there is a road called Hydrangea Walkway with 2,300 hydrangea flowers.
Best time: Middle of June
Address: 1 Tsurumai, Showa-ku, Nagoya, Aichi
Google Maps
Access: Take the Tsurumai line, or, the JR Chuo line to Tsuruma Park. From there is 1 minute on foot.
Hours: Open 24 hours
Prices: Free entry
Visit the website (Japanese)

In addition to the places I’ve mentioned, there are many other wonderful places like the Otsuka Shokaiji (大塚性海寺) in Inazawa, or Chayagasaka Park (茶屋ヶ坂公園) in Nagoya. 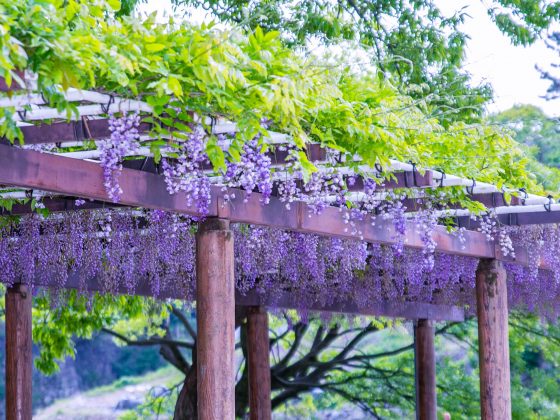 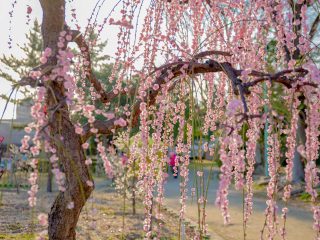