Japanese summers wouldn’t be the same without fireworks. Many seasonal events feature spectacular firework displays, some of which can get quite crowded. Although fireworks displays in Japan are usually held in summer, the handheld fireworks festivals are held from spring to fall, mainly in Toyohashi, a city located in the southeast of Aichi Prefecture, where these handheld fireworks originated. 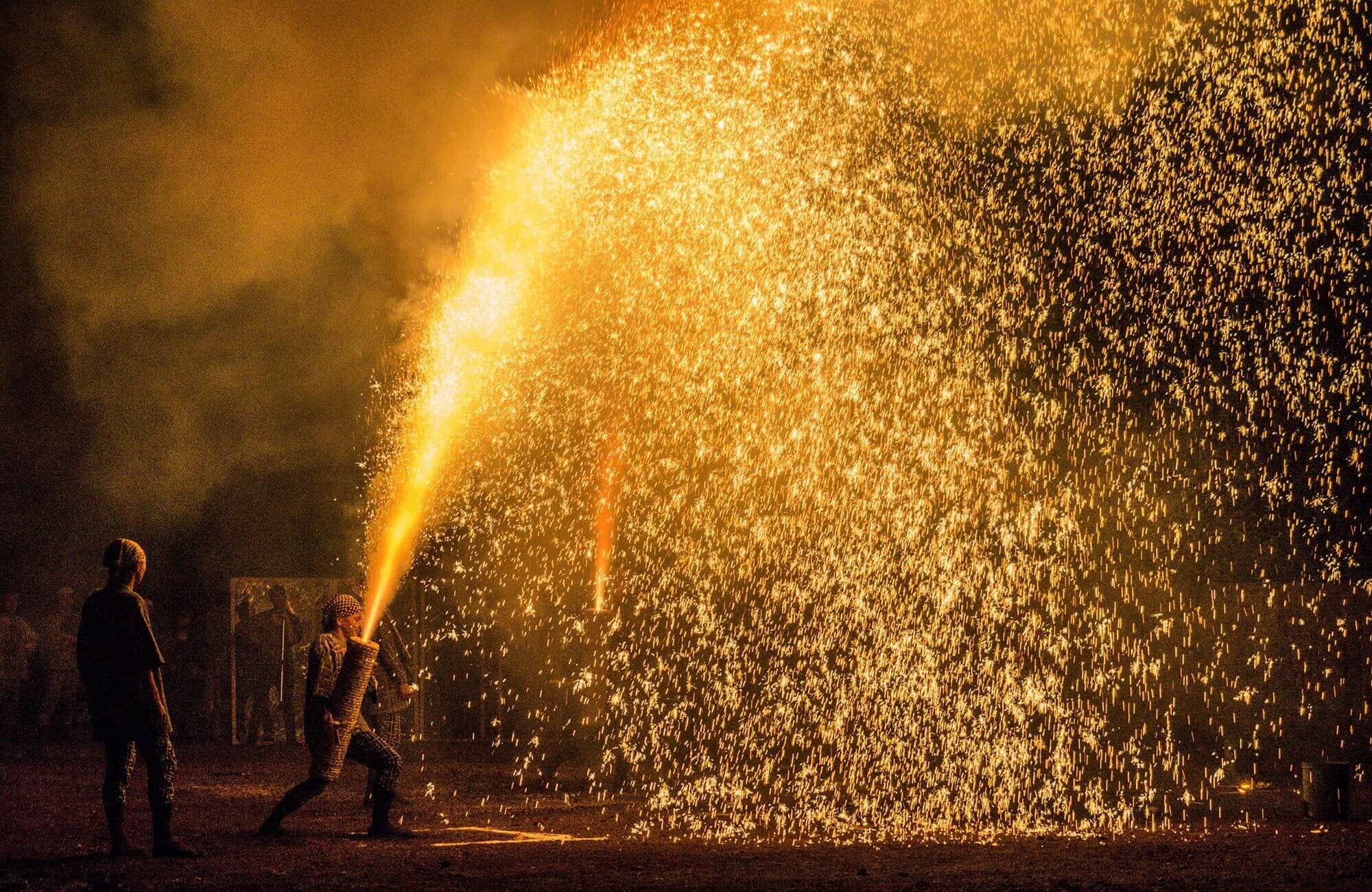 A Long Tradition That Has Been Passed Down Generation To Generation for Over the Years.

The handheld fireworks, called Tezutsu Hanabi in Japanese, are said to have originated in Toyohashi city. Tokugawa Ieyasu, who became the first Shogun of the Edo Period, was first able to view fireworks in 1613 when a British envoy of King James I and a Chinese merchant visited Ieyasu at Shizuoka Prefecture and showed him the fireworks. After that historical fact, the Shogun brought that technology to his home in Mikawa province (current Aichi Prefecture).

At the time gunpowder was strictly forbidden throughout Japan, but the villagers of this region were allowed to use Tezutsu Hanabi as a part of Shinto rituals offering to the gods in exchange for rich harvests, good health, family fortune and prosperity, and good luck in battle.

From the Cutting of the Bamboo to the Weaving of the Rope, Everything Is Done by Hand.

A Tezutsu Hanabi consists of a cylindrical cartridge made of Moso bamboo, a hollowed-out bamboo tube, older than 3 years. First, bamboo is boiled to remove its oil and then wrapped with straw rope. The bamboo tube, which is usually around 80 cm tall and 15 cm wide, is packed with 1.5 to 3 kg of gunpowder. The gunpowder is a mixture of black gunpowder, niter, sulfur, charcoal, and iron powder. 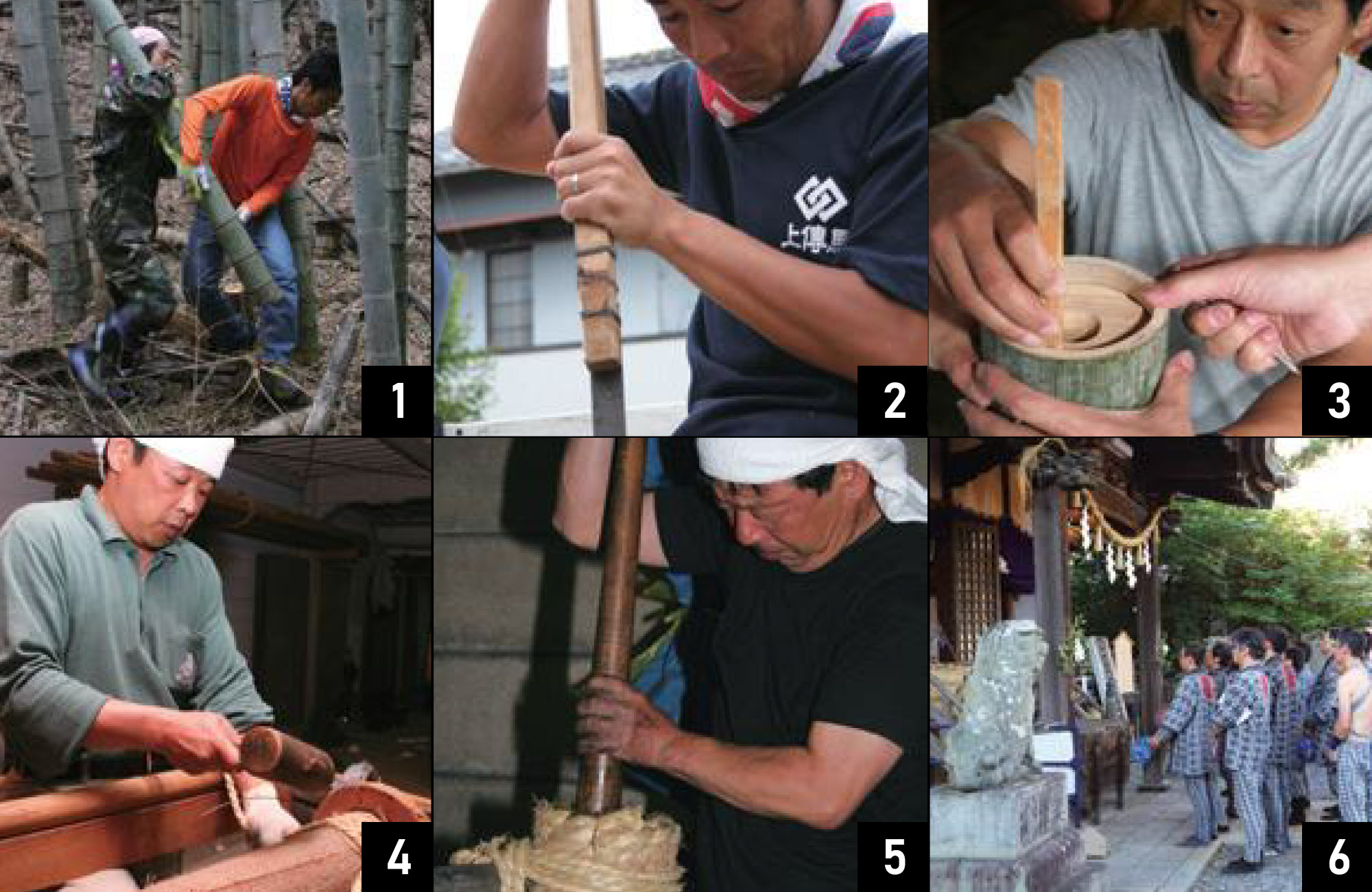 Despite the fact that it is a process traditionally only carried out by men, more and more women can be seen participating in this event not only carrying the regular size, but also the handy Tezutsu fireworks in a smaller size.

Sparks of Fire Roaring up During the Tezutsu Hanabi Festivals

One of the most popular festivals is the annual Toyohashi Gion Festival, held in mid-July at Yoshida Shrine and at the remains of Yoshida Castle in Toyohashi Park. During this three-day festival many events are held around the city; Shinto rituals, dances, processions, and fireworks. Other Tezutsu Hanabi festivals take place in different locations around Toyohashi city, like shrines, parks, and city surroundings. Each festival has its own slightly different traditions, rituals and also differs in the number of Tezutsu Hanabi ignited. If you are lucky you may be also able to watch a traditional performance of local Taiko drummers, which makes the festival even more impactful. 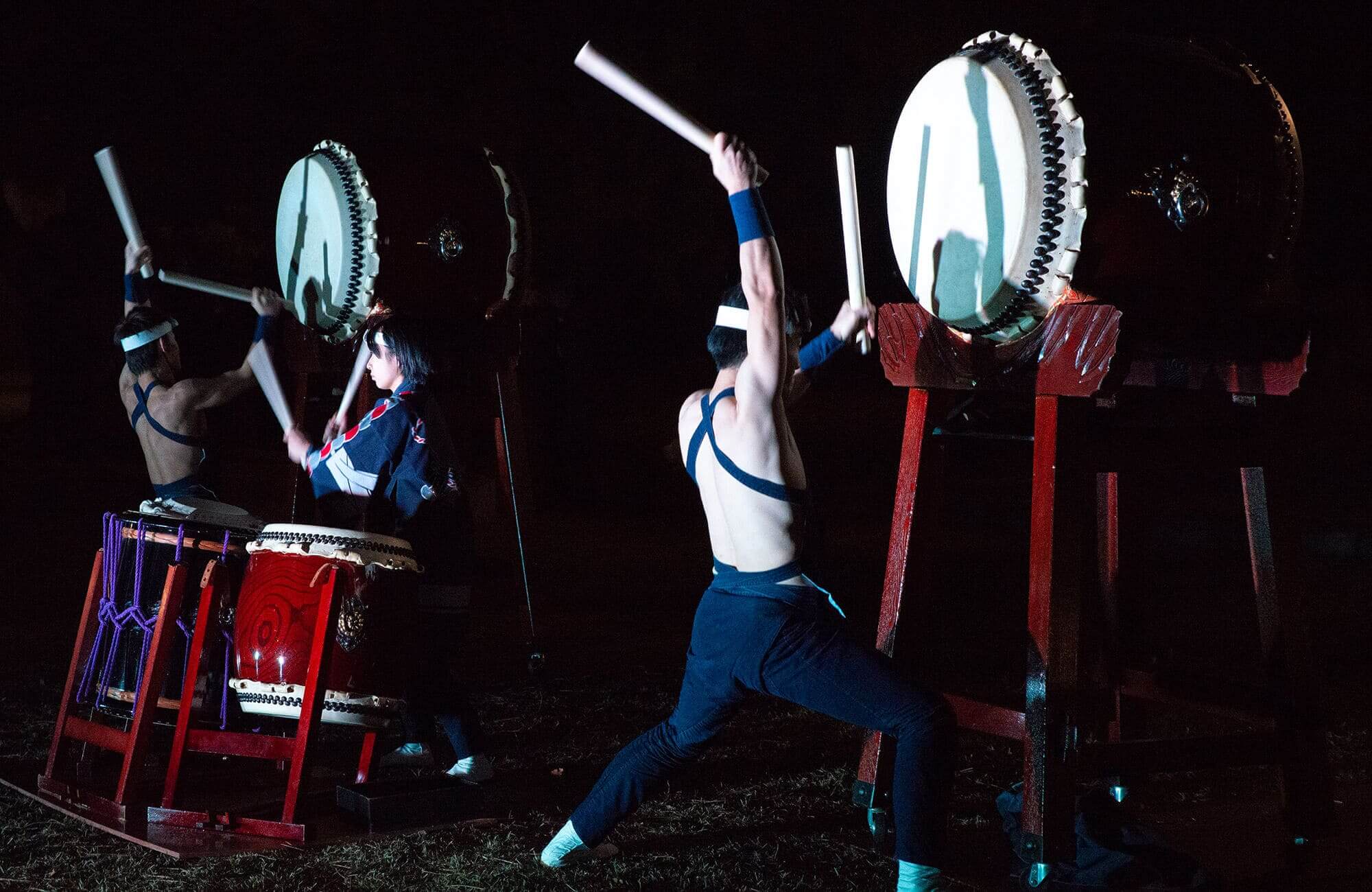 Once the fuse is ignited, the gunpowder explodes and transforms into a flame creating lots of heat and gas. The bottom of the flame is white and the top is yellow-orange. While the carrier is lifting up the canyon, the flame splits, and there is a shatter into thousands of sparks that turns into a glittering shower. The golden sparks splatter all around the person carrying the Tezutsu. The carrier will hold the Tezutsu for about 20 seconds. But it seems much longer as you watch the spectacle in awe wondering if he doesn’t feel hot. The curtain of sparks vanishes with an explosion in which the bottom of the hand cylinder bursts with a booming sound. And the carrier rapidly throws it to the ground not to get burned. 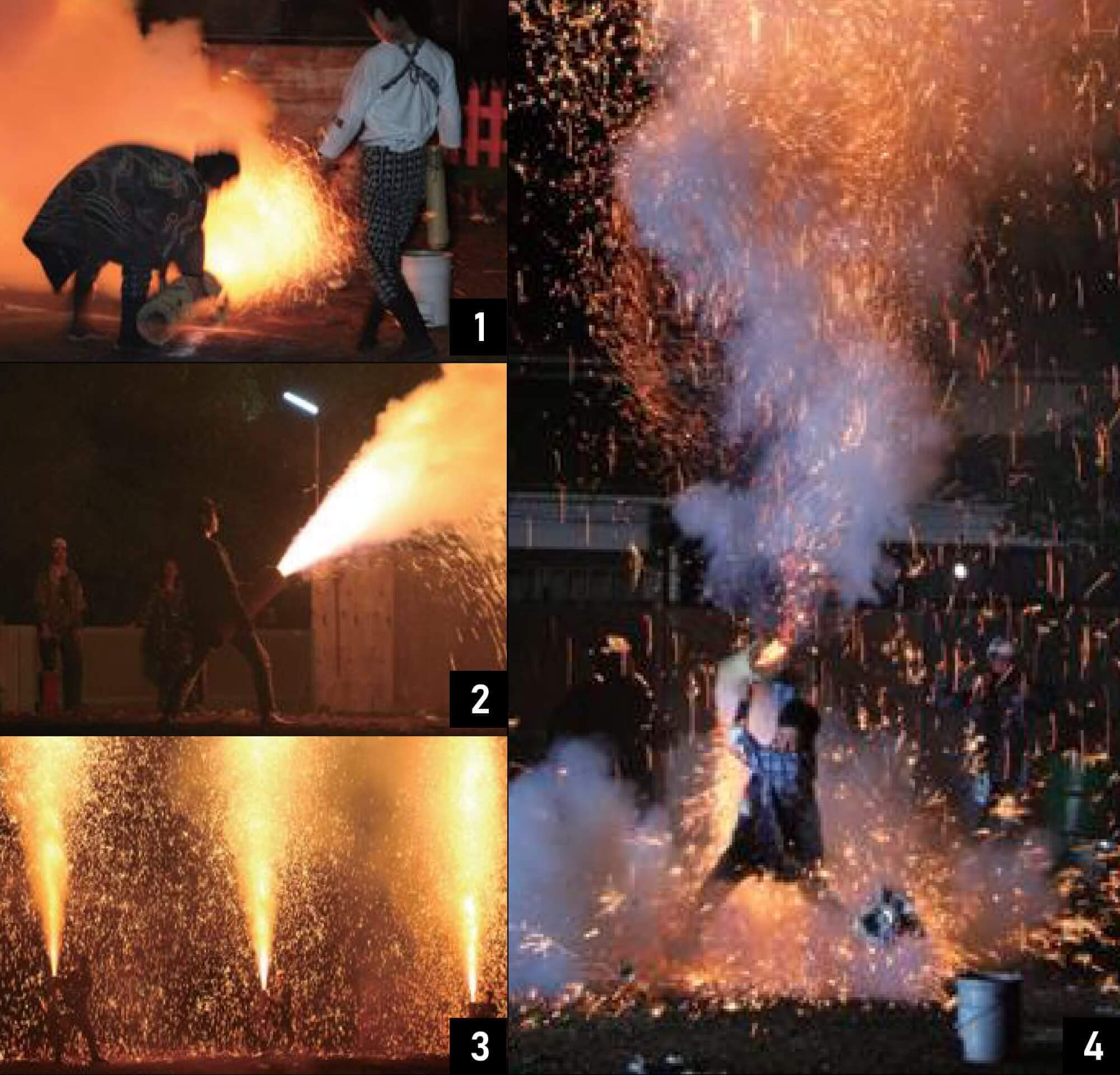 Another amazing part of the Tezutsu Hanabi Festivals is the opportunity to hold a handheld firework in your own two hands. To experience how heavy it is and just imagine yourself holding it over your head while fire and sparks are exploding out of the top. 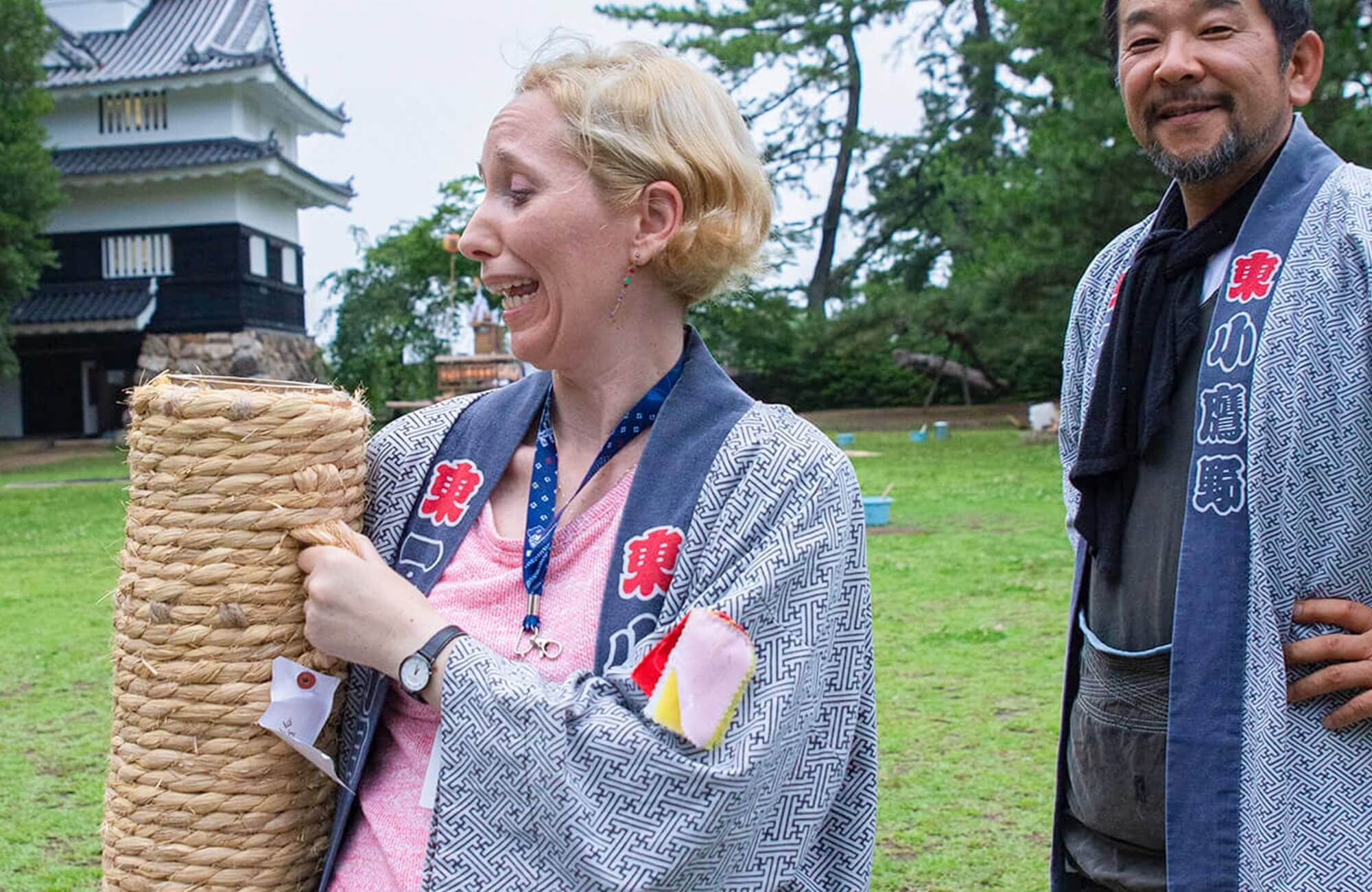 What’s more, apart from the Tezutsu Hanabi, there are other special fireworks you can view during these festivals. The Youkan Hanabi, earlier mentioned, is a reduced size of the Tezutsu Hanabi that can be carried by both men and women and is considerably lighter than its original bigger version. 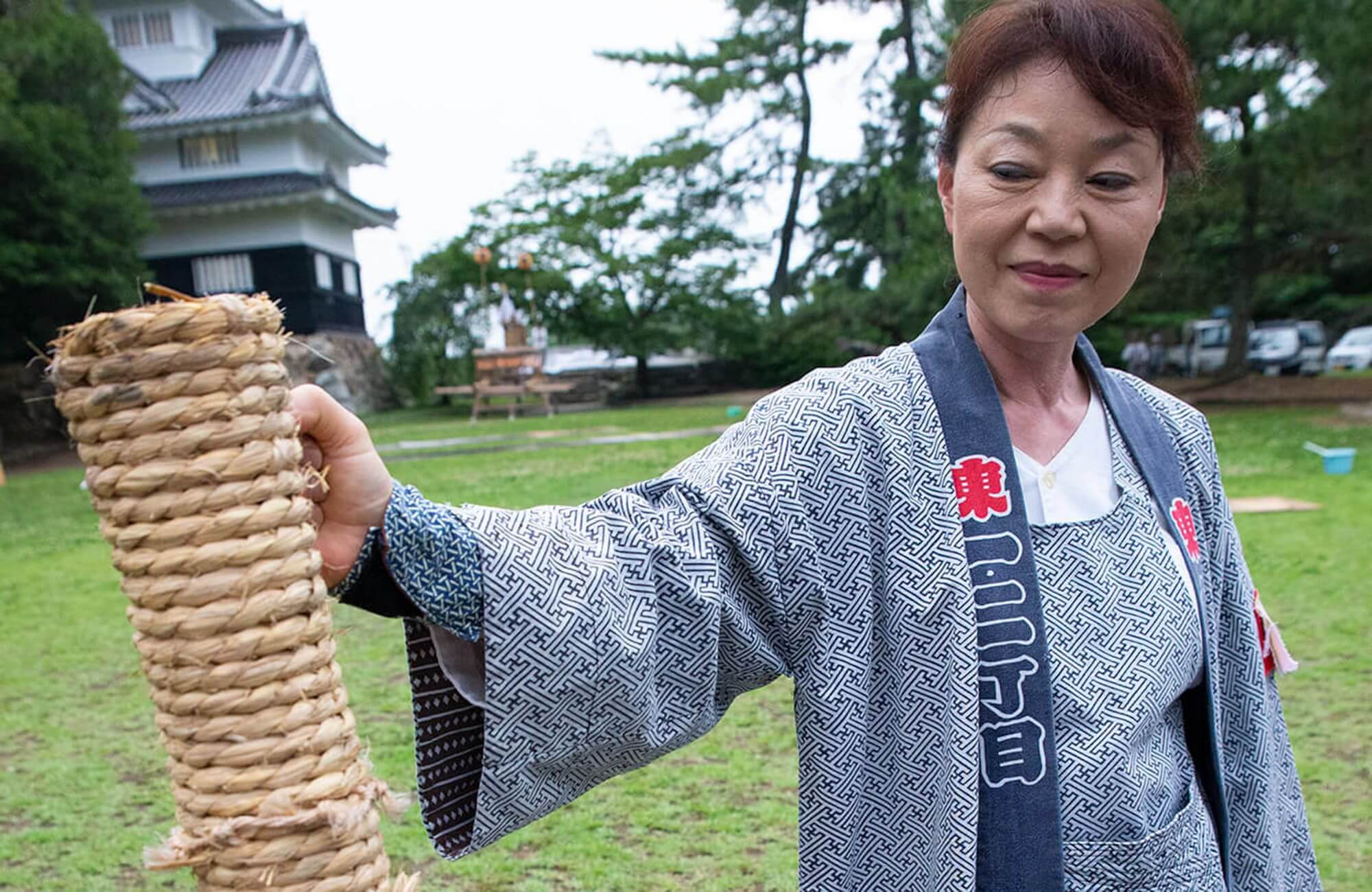 The Ozutsu Hanabi is a fixed base made for launching modern fireworks. It takes the name from the cannons used during the late Warring States Period (475–221 BC). And the Tsunabi Hanabi are small Tezutsu Hanabi fireworks tied to a rope and suspended in the air. When ignited it reminds of a scarlet waterfall suspended in the sky. You will be amazed by all! 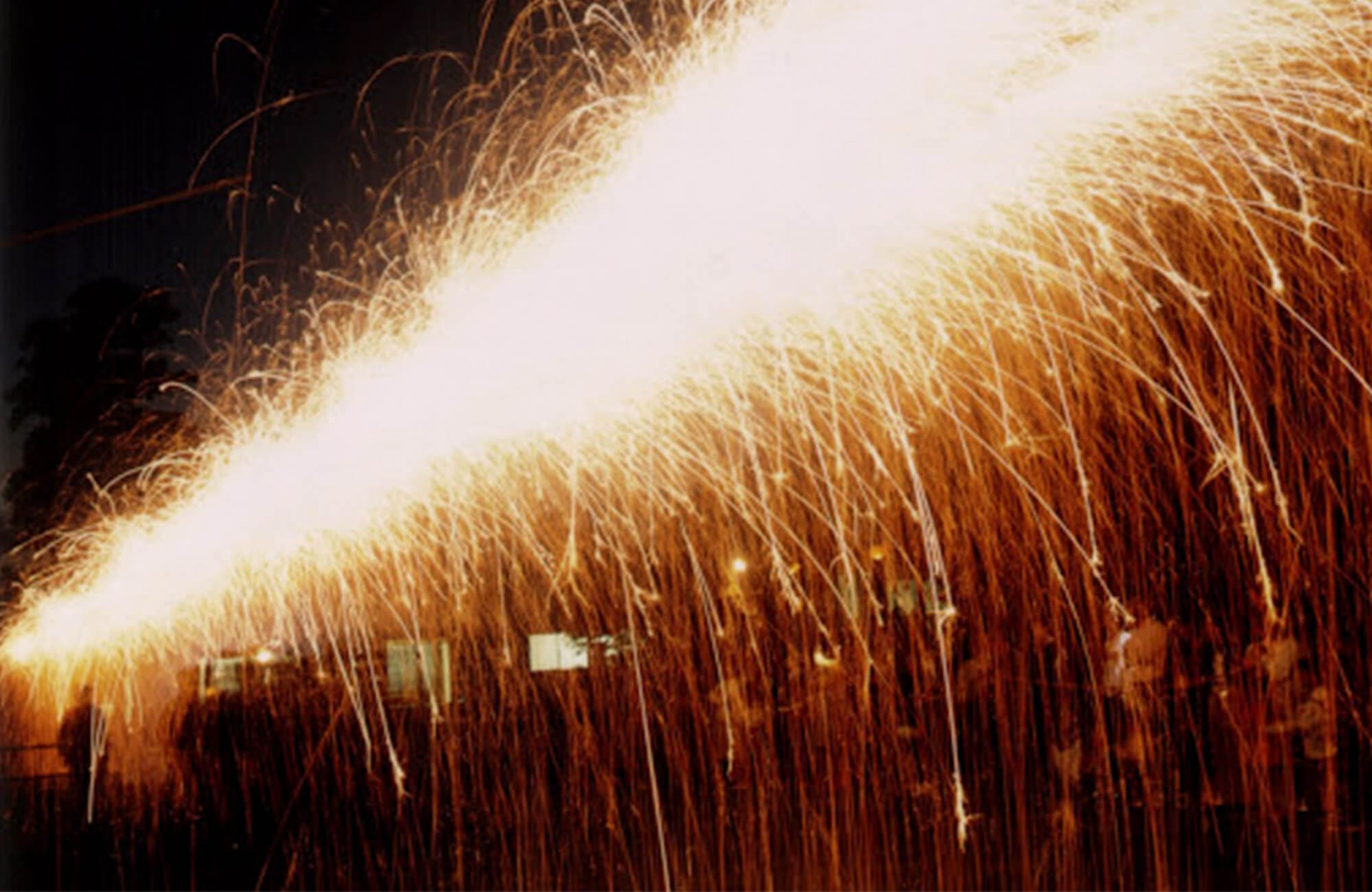 Watch the Experience in 8K the Tezutsu Hanabi fireworks Hada Festival
When: The first Friday and Saturday of October
Where: Hada Hachimangu Shrine
Google Maps

In Toyohashi, there are many attractions worth visiting. Take a pleasant walk through Toyohashi Park and Yoshida Castle and get to know more about the history of the city. 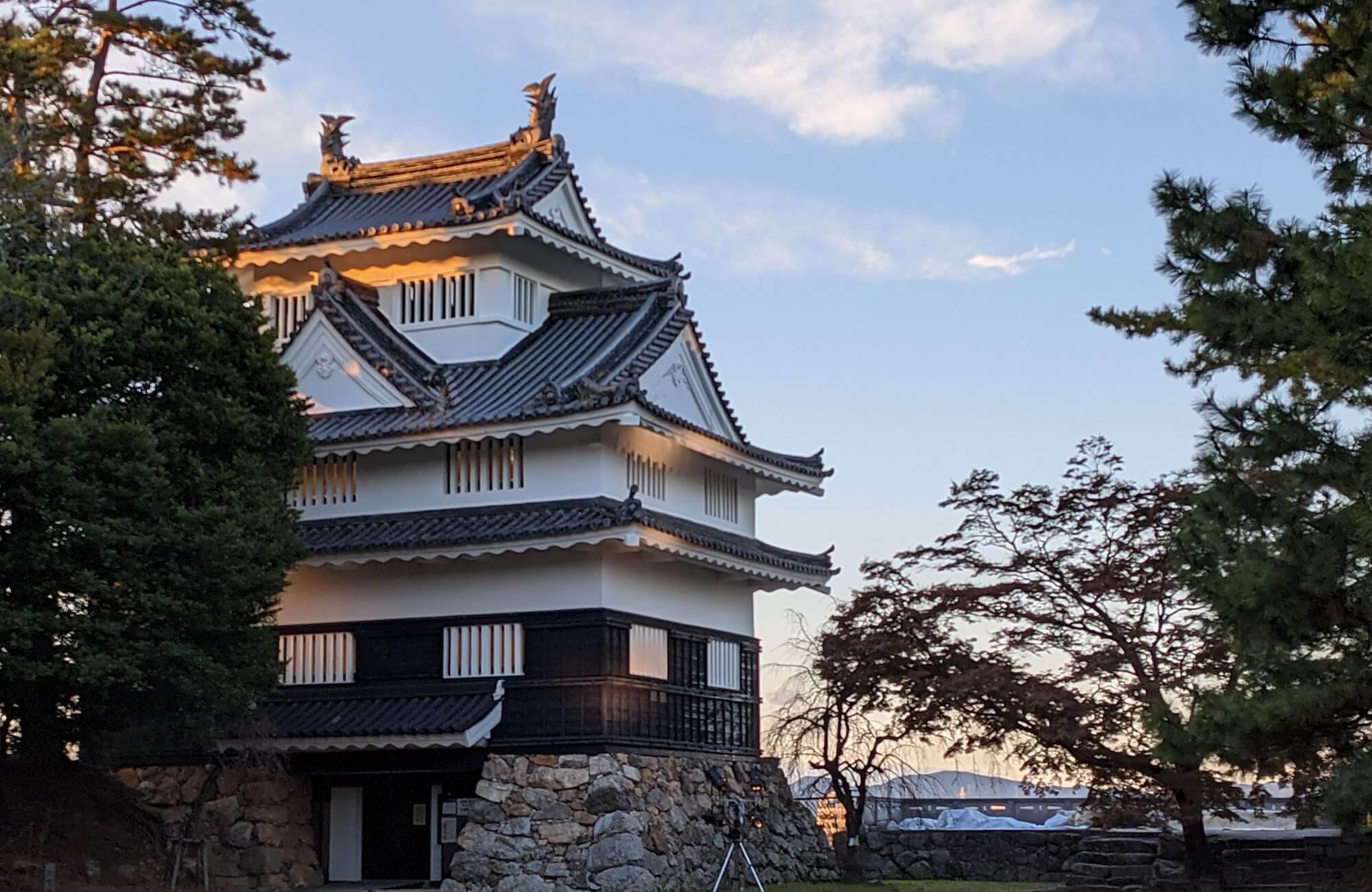 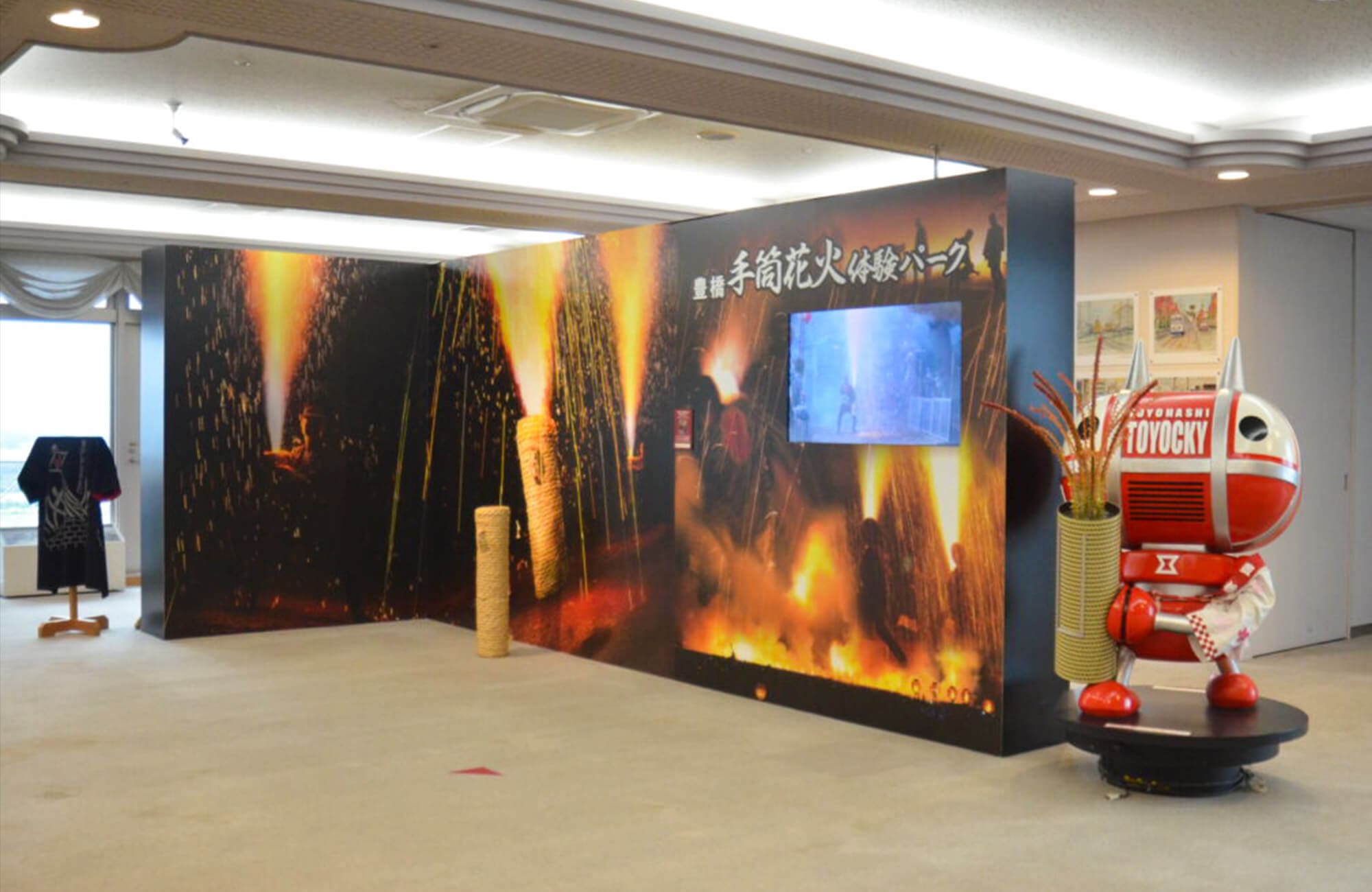 Don’t miss Futagawa Shuku Honjin Museum, the thirty-third post town located along the Tokaido, a road that connected the Edo capital (now Tokyo) and the old capital Kyoto. The museum is a complex of the buildings remaining from the Edo Period: the Honjin, lodgings reserved solely for the members of the Imperial Court and the samurai nobility, the Hatogoya, lodgings for the common folk, merchants, craftsmen, pilgrims and lower ranked samurai, and the Komaya House a traditional Komaya merchant family residence. 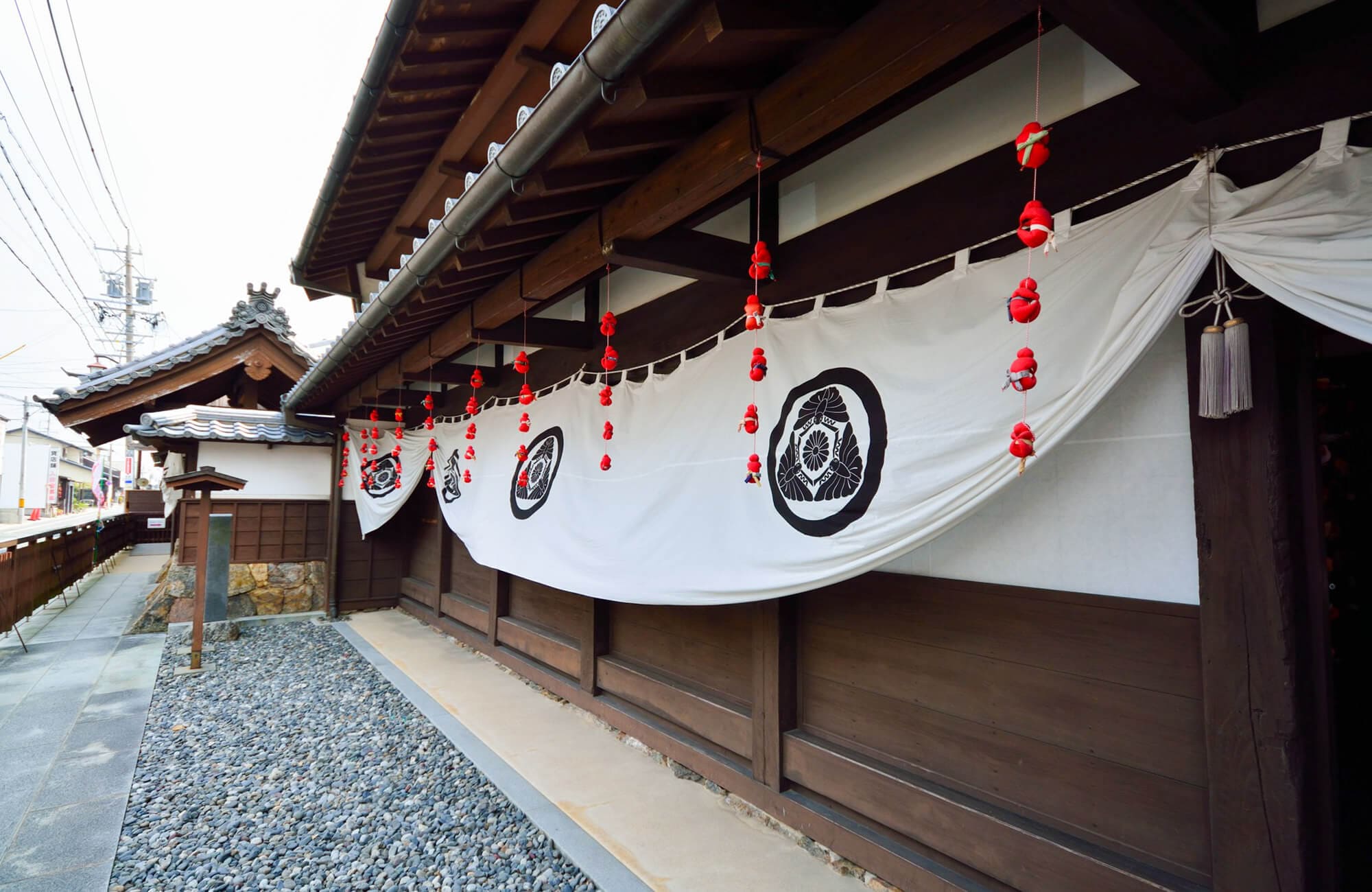 When it comes to getting to know what locals eat, don’t miss the Toyohashi specialties such as Curry Udon, a delicious combination of Curry with rice and Udon noodles; and Chikuwa, a processed Japanese fish cake made from a fish paste called Surimi, probably quite unusual to foreigners but surprisingly delicious. While visiting Toyohashi, also get a ride on the old and picturesque tram-train that crisscrosses the city. It is the only tram-train remaining in the Aichi Prefecture. During summer some of the cars transform into a beer train for parties that includes an all-you-can-drink service. Since it is just one stop from Toyohashi Station, it might be a nice idea to make a stopover at Toyokawa and explore Toyokawa Inari the Temple of Thousand Foxes. Take a look at this post to get to know about Toyokawa city.

How to Get Here

if you are coming from Tokyo Station, take the Tokaido-Sanyo Shinkansen (bullet train) to Toyohashi Station. Switch to Toyohashi city line and get off at Toyohashikoen-mae Station.

From Toyohashikoen-mae Station, it’s a 3-minute walk to Yoshida Park.