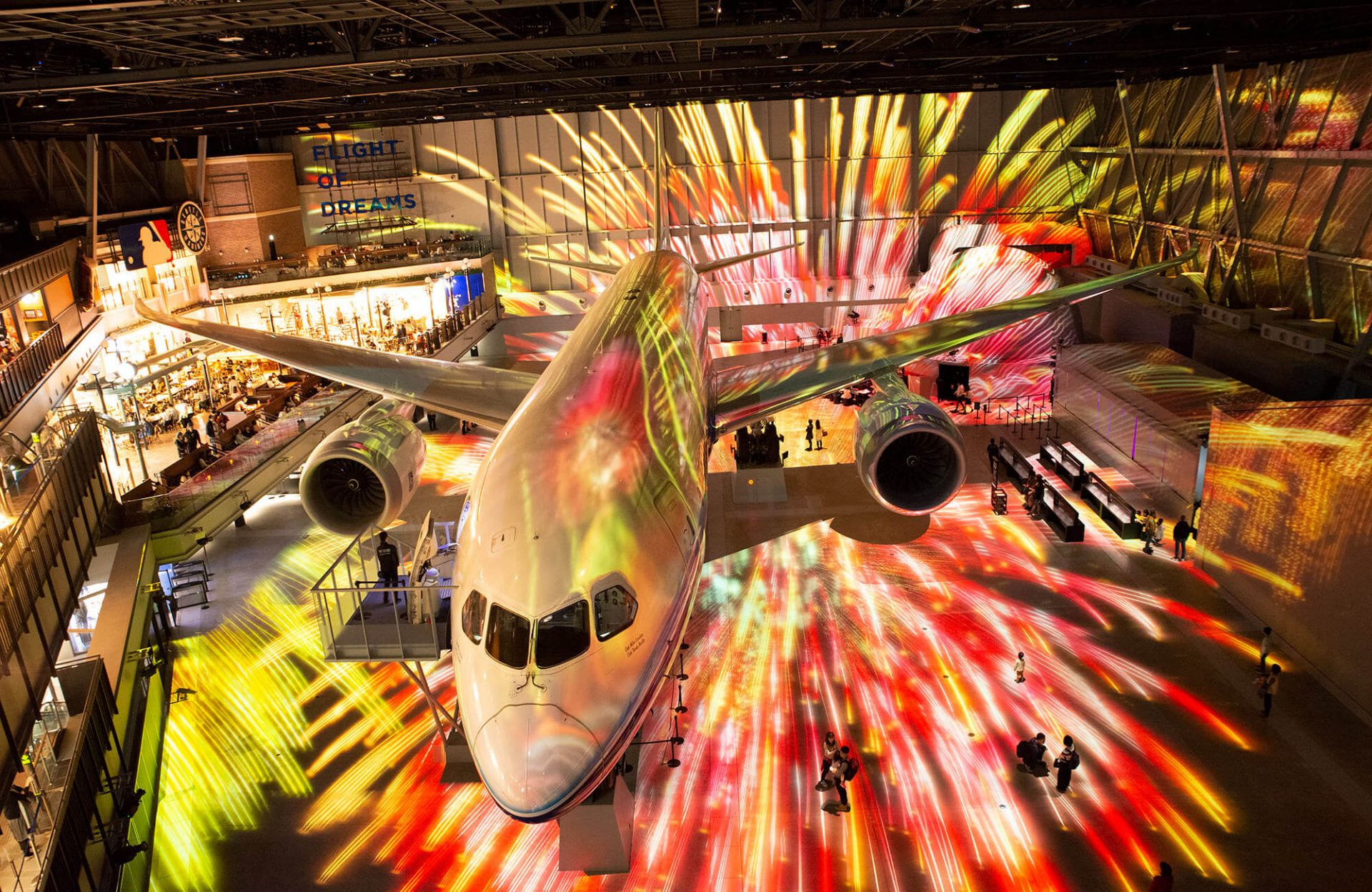 Now going to the Chubu Centrair International Airport (Centrair), even with family, can be a complete fun thanks to facilities such as the Flight of Dreams. The Flight of Dreams is a new installation inaugurated on October 12, 2018. The theme of Flight of Dreams revolves around the Boeing 787 aircraft and aviation in general, learning about both in a fun and interactive way with different areas that are enabled inside. Beginnings of Flight of Dreams

Aichi Prefecture, the heart of Japan’s aerospace industry, played an important role in the development and financing of the Boeing 787 aircraft. Three big Japanese companies – Mitsubishi Heavy Industries (Nagoya Aerospace Systems Works), Fuji Aerospace Technology, Kawasaki Heavy Industries – are responsible for manufacturing 35% of the parts for Boeing aircraft. The wings, the mid forward fuselage, the center wing box and the main landing gear wheel well are the pieces built in the Aichi region. From the Chubu Centrair International Airport are transferred to the final assembly plants of the Boeing 787 Dreamliner, in the United States, with the cargo plane Boeing Dreamlifter. On June 22, 2015, the aeronautical company Boeing donated its first test prototype 787-8 Dreamliner N787BA, nicknamed “ZA001” to Chubu Centrair International Airport. Symbolizing the historic partnership between Boeing and Japan’s leading aerospace industry. With this historic milestone, and with the added sponsorship of the Japanese airlines ANA and Japan Airlines, the great ambitious project of “Flight of Dreams” began. One of the main objectives of this project is to encourage the imagination and interest of the future pioneers of aviation.

Exploring the Flight of Dreams

Once you arrive to the airport, the Flight of Dreams building is accessed from the Access Plaza, in the Passenger Terminal, using the footbridge that leads to the New Terminal area.

The exterior architecture of the building evokes an aircraft hangar. The plane was inhabited in the middle of the construction of the building to facilitate the continuation of the works until its completion. In the following video you can see when the prototype was presented to the public before being introduced to the Flight of Dreams building, when it was still halfway through construction.

In this other video, you can see how the Boeing mechanical team carried out the lifting of the aircraft to fix it to a stable base in the area of the aircraft’s wheels.

The interior of the Flight of Dreams building is divided into 2 large areas: Flight Park and Seattle Terrace. The Flight Park: Learn about aviation in a fun way

The Flight Park is the area where the first Boeing 787-8 Dreamliner test prototype (ZA001) is permanently displayed. Around this, there are several interactive facilities related to aviation created by the famous Japanese team specialized in digital art content, Team Lab. These are the areas you will find in the Flight Park:

In this attraction, a projection mapping and music show is performed every 15 minutes. Its main character is the Boeing 787-8 Dreamliner prototype. From the observation area, located on the fourth floor, you will see this fascinating show where the real space disappears and plunges you into a fantastic world where you will feel that you are flying along with the plane.

*Be sure to check the projection hours of this show and make a reservation of the show time that fits you in advance.

Test your ability to fly your own paper plane. Take a sheet of paper and turn it into an airplane. From the light portal you can launch your plane and see how far it can fly. While the small paper plane pierces the laser light rings one by one, geometric shapes and sounds are activated, changing the light and the sound. You can pick up your plane at the end of the light portal and fly it as many times as you want.

Draw and design your own plane on paper. Once you have finished painting your plane, it is scanned by this attraction’s staff. In a few seconds, your plane becomes a real plane that you can control with the smartphone you receive at the starting point. The plane will enter the three-dimensional dome and there you can make it fly along with the other pilots.

In this attraction you will enter the Boeing Everett Factory, the largest aircraft assembly plant in the world. Learn about the manufacturing process of the Boeing step by step. In this attraction you can become part of the flight crew. Put your outfit like a flight attendant and serve the customers on a fictitious flight.

Learn how is the Boeing 787 aircraft. Discover the different parts of the aircraft using the smartphone app “787 Dreamliner Explorer”. Complete the 787 image album by collecting all parts of the plane that are scattered throughout the Flight Park. This app is available for iPhone and Android.

Enter to the Boeing 787 cockpit. Here is a realistic reproduction of the control panels and the piloting system. In the video explanation that plays next to the cockpit you can meet the pilots of the test plane and learn many other important things about the aircraft.

8. The Museum of Flight Learning Center

This is a craft workshop where you can learn by the STEM education program of the Seattle Aviation Museum. STEM is an acronym for Science, Technology, Engineering, and Mathematics, important subjects to learn when you study about aviation.

*This workshop takes place only on Saturdays, Sundays and holidays.

This attraction is for anyone who wants to enjoy the experience of flying the Boeing 787 through a simulator. The simulator is a real reproduction of the cockpit. An instructor will explain you what is necessary to control it. You can choose from different price and time plans. From seeing and taking photos of the simulator (5 minutes, 1,080 yen), or trying to manage the flight simulator by making a real flight route (from 30 minutes, 12,420 yen).

This is the second installation opened by the Japanese company LUXURY FLIGHT. Based at the Haneda International Airport (Tokyo), LUXURY FLIGHT offers an exclusive flight simulation service that until now was reserved only for aircraft pilots. This attraction is one of the most popular of the Flight of Dreams and it is necessary to book in advance. You can check the availability and prices here (Japanese).
Reservations by phone: LUXURY FLIGHT Haneda International Airport (+81) 03-6423-7371
Reservations time: 10:00-17:00

This is the first Boeing store that opens outside the United States. Only here you can find exclusive articles of the Flight of Dreams, Boeing articles imported directly from the United States. You can also find real pieces of Boeing aircraft converted into decorative pieces and furniture, such as the soft drink and snacks cart turned into a refrigerator, or a piece of wing turned into a bank.

Here you have a video presentation of the interactive areas mentioned above.

* To enjoy this area you have to buy your ticket in advance or you can buy it the same day of the visit at the counter.

This is the second area, inspired by the urban landscape of Seattle, which is precisely where the Boeing company was founded. With this area, Flight of Dreams aims to bring a part of Seattle’s gastronomy culture to the region. Popular shops and restaurants stand out, such as Starbucks, Beecher’s Cheese, Ethan Stowell, Fran’s Chocolates, Pike Brewing and many others. Click here for the full list of shops and restaurants. By train
It is the fastest, easiest and most convenient way to go to Centrair. Take the train from the Meitetsu line. The train Sky Limited Express (Myu Sky), is the fastest because it takes only 28 minutes. But it is a bit more expensive and you have to pay for the first class seats. The price is 1,230 yen per trip + 360 yen for the seat reservation.

There is another train, a Limited Express that takes about 35 minutes and you can choose between first class or ordinary seats. If you choose ordinary seats, you will only have to pay the basic rate 870 yen. 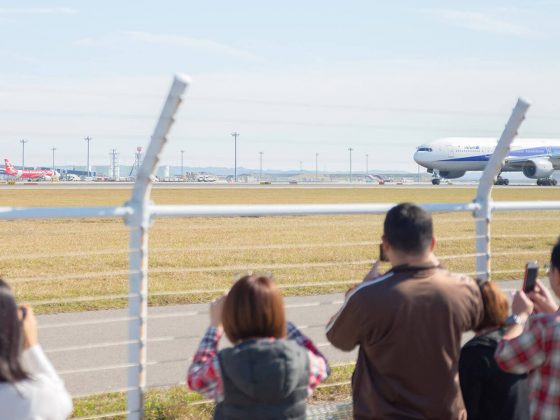 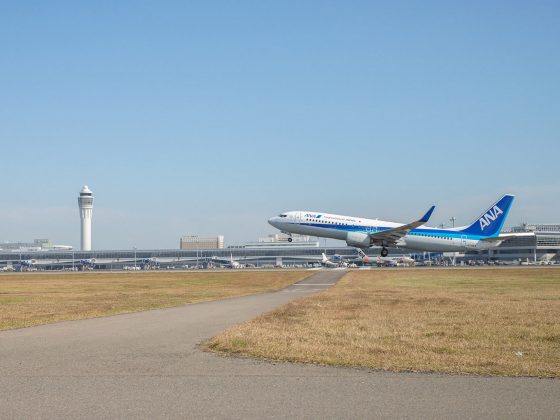 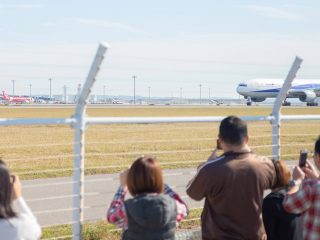 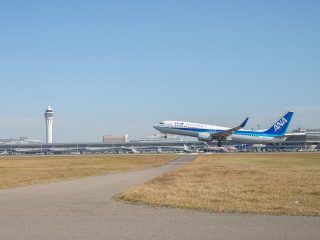 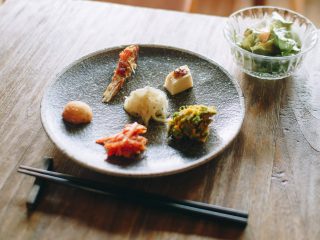 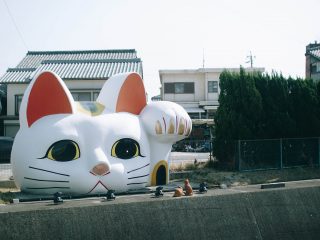